The Goods and Services Tax Law (GST) proposed to be introduced in India, drawing powers from the 101st Constitutional Amendment Act brings in an unprecedented but much needed provision regarding anti-profiteering measures in the wake of paradigm shift in indirect tax structure of India.

Anti-profiteering measures mean steps or actions taken against a person who seeks or extracts exorbitant profits from a certain opportunity, here implementation of a new indirect tax regime. Incorporated in the latest model law forGST, it is a preventive step to counter initial inflation which is highly anticipated as an impact of GST implementation in India. Such measures are essential to control undesired price rise due to change in tax structure. Especially when it is tough to precisely predict thechanges and effects thereof. Such measures shall ensure that traders and suppliers do not make unreasonable profits by restricting the tax benefits and charging the tax hikes, causing price rise, in general. Such shall not only save the consumer market, but shall also alleviate confidence among them.

The measure has been introduced as Section 163 of the Revised Model GST Law – Draft (Nov 2016). It proposes to ‘constitute an Authority, or entrust an existing Authority constituted under any law’, which shall regulate prices during the temporary inflation phase for a prescribed period.

The anti-profiteering measure shall take into account practical aspects such as sudden shift in demand and supply, which usually affects profit margin and not put hardship to the traders.It is intended to assure consumers that excessive price is not charged by the suppliers. In absence of such as measure, it is highly probable that a soaring inflation may occur as has also been experienced in countries like Canada, Australia, Singapore, etc. right after GST (VAT) implementation.

Anti-profiteering measures have been used by many countries for combating a temporary price rise during the tax transition phase. However, the methodology of implementing anti-profiteering measures differs from one country to another. Selection of methodology may include consideration of several sensitive economic factors likesuppliers’ costs, supply and demand conditions, geographical and product markets, existing taxes on goods, etc. For instance, the Malaysian government chose to use the Net Profit Margin methodology to control prices. The method ascertains a Normal Profit Margin for each product on a base day (January 1, 2015 in Malaysia’s case), and any profit charged by the dealers above this base margin is considered ‘Unreasonably High Profit’. Any person found guilty of charging such unreasonably high profit is charged with penalties.Alternatively, Australia followed the Net Dollar Margin Rule which served as the fundamental principle for its anti-profiteering guidelines. That is, if the new tax scheme – GST in this case – caused taxes and costs to fall by $1, then prices should fall by at least $1. At the same time if the cost of the business rose by $1 under the new tax scheme, then prices may rise by no more than $1.

The proposed anti-profiteering provision under Section 163 in theModel GST law is intended to curtail the possible outbreak of uncontrolled profiteering due to tax fluctuations, or supply-side pressures, or supply-demand conditions, etc. expected during and post implementation of GST in India.It provides to “examine whether the input tax credit availed by any registered taxable person or the reduction in price on account of any reduction in tax rate have actually resulted in a commensurate reduction in the price of the said goods and/ or services supplied by him.”The intention of bringing in such anti-profiteering measures are certainly pious and for common good. However, certain pertinent questions do arise. They being:

Lessons can be drawn from the existing GST regimes in the world, like Malaysia, Canada, Singapore, Australia, etc., the implementation thereof and the situations or repercussions faced therein,to compose ourselves accordingly so as to prevent the occurrence of a similar scenario or combat any such circumstances if need be. Anti-profiteering is one such effective learning that may prospectively avoid extreme inflation in the economy, or at least control the rate of inflation that may occur, as also protect the customers from unreasonable and unwarranted extortions by the supplier and keep a check on those who hope to fetch undue benefits or profits in the tax-fluctuation scenario. 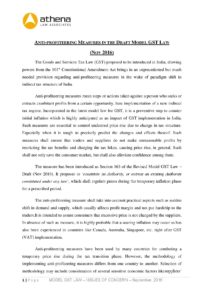