The GST structure as it stands today shall only result in higher property costs for the home buyers. Non-exclusion of land value from GST net, non-availability of ITC to developers and irrational Valuation Mechanism shall lead to such an anomaly.
The Model GST law which has been shared with the stakeholders shall only add up to the woes of homebuyers unless necessary amendments are brought in. The much promoted and discussed benefit of GST i.e., reduction in costs is not extended to the real estate sector. The ill effects would be equally felt by the industry as well as home buyers.
It is a glaring fact that the most important feature of GST, i.e., seamless transfer of Input Tax Credit is specifically excluded for real estate sector. Section 16(9) of the Model GST Act doesn’t allow developers the set off of the GST paid by him to the contractors who are engaged in construction for the developers. The taxes so paid shall become a cost for the developer which would ultimately be borne by the home buyers.
Further, the provisions of valuation have been so drafted that it would lead to arbitrary double taxation. In the Model GST Law, any material provided by the developer to the contractor for construction of building shall be included in the value of total supply of services by the contactor which would increase the cost. Now, GST shall be paid twice on the same material i.e. – once at the time of purchase by the developer and second when the same shall be included by the contractor for discharging GST which he shall charge from the developers.
Same shall be the fate of various services such as architects and engineers arranged by the developer and they shall also be included in the transaction value of the contractor for the computation of GST liability.
These would cumulatively add up to result into very high GST because of the cascading effect and would thus be a matter of serious concern, for the homebuyers, for after all developers would pass on his cost to them.
The situation is further frustrated by non-exclusion of value of land from the transaction value. In absence of any specific exclusion, GST might be payable on entire value of the flat which shall also include the cost of land. Cost of land is generally huge, especially in metropolitan and other big cities. Presently, there is no VAT/Service tax liability on value of land. However the provisions of Model GST law doesn’t provide for exclusion of land from its purview.
On arithmetic application of above issues to a sample transaction in which a buyer, a developer and a contractor are involved, the outcome may be explained as under:
a. Assumed that sale value of property is Rs. 50 lacs which includes land – Rs. 35lacs, Construction Rs. 15 lacs [material – Rs. 10 lacs and services – Rs. 5lacs].
b. In the current scenario, sum total of service tax and VAT shall be roughly 12.5% of construction value, which totals to Rs. 1,87,500 [12.5% of 15lacs].
c. Whereas under GST, assuming a tax rate of 18%, tax liability shall be Rs. 9lacs [18% of price of flat- Please note that land is not excluded], which is way too higher than the current tax liability.
This is apart from the cost of input taxes, which builder would bear, since unlike in present scenario, he would not be eligible to claim input tax credit on tax paid by his contractors.
In other terms, one buying a house worth 50lacs should be ready to dole out another more than 7 lacs as tax, purely due to the structuring of law which could have been avoided. This can be avoided even now in case appropriate action is taken by the drafting committee of the GST Council. One must note that the additional tax mentioned above is separate and in addition to the stamp duties and various other fees/ costs involved in a property purchase, which would remain unchanged even under the GST regime.
It is evident that this is a situation which would cripple the entire real estate industry and cause severe chaos and economic disruption.
In the situation that persists, it is imperative that the government must analyze, re-consider and proactively rectify the issues to safeguard and ease the ailing real estate industry as well as the buyers, otherwise the ambitious scheme of our Prime minister, Shri Narendra Modi i.e. “Pradhan Mantri Awas Yojna Housing for all scheme by 2022” might be a failure even before it starts. 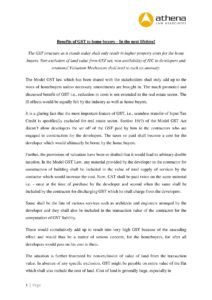