Today we have an article on the landmark entry tax matter which was heard by the 9 Judges Constitution Bench of the Hon’ble Supreme Court during the phase when the Parliament was all set to and subsequently passed the 122nd Constitutional Amendment Bill relating to GST (subsuming entry taxes). Give it a read and we would be pleased to have your feedback! Read the article below or find the link to the file. Happy reading!

AS THE PARLIAMENT DRIVES GST TO A REALITY, 9 JUDGES CONSTITUTION BENCH OF SUPREME COURT RESERVES THE JUDGMENT FOR LANDMARK ENTRY TAX CASE
As the readers would be aware that constitutional validity of entry tax laws of several states was in challenge before the 9 Judges Constitution Bench of the Hon’ble Supreme Court led by the Hon’ble Chief Justice of India.
Despite the law laid down in 1960s in the two Constitution Bench judgments of the Hon’ble Supreme Court in Atiabari Tea Co. Ltd. case and Automobile Transport Ltd. case, the constitutional validity of entry tax has been a subject matter of litigation for more than 50 years; and it has been evaluated time and again by the Supreme Court and the High Courts of the various States on the touchstone of the principles of Article 301 of the Constitution of India read with compensatory tax. The conflicting decisions given by the Highest Court led to unending litigation and flood of appeals reaching the door steps of Hon’ble Supreme Court.
The issue was thus placed before the 9 Judges Constitution Bench of the Hon’ble Supreme Court in order to examine whether the earlier Constitution Bench judgments in Atiabari Tea Co. Ltd. case (5 Judges) and Automobile Transport Ltd. case (7 Judges) laid down correct principles of law. More precisely, the issue examined by the Supreme Court was whether entry tax per se constitutes violation of Article 301 of the Constitution of India if it is not discriminatory.
Interestingly, hearing of this matter commenced on 19th July 2016 i.e. after the commencement of the monsoon session of the Parliament (on 18th July 2016) which was expected to pave the passage for the GST Bill. This means that when the parliament was all set to pass the 122nd Constitutional Amendment Bill relating to GST which would subsume entry taxes, the Hon’ble Supreme Court was beginning to hear on the constitutional validity of entry taxes. However, the Court decided to continue hearing of the matter as it was necessary to resolve millions of cases pending on this vexed issue, involving huge stakes of money. The hearing continued on a day-to day basis till 21st September 2016 even after the 122nd Constitutional Amendment Bill became 101st Constitutional Amendment Act on 8th September 2016, consequent to it being passed by the Rajya Sabha on 3rd August 2016 and receiving presidential assent on 8th September 2016.
The hearings before the Court witnessed a marathon of arguments on behalf of the assessees which went from discussing the federal structure of India, economic unity of India, taxing power of the Centre and States, interplay between Article 301 and 304, conjunctive nature of Article 304(a) and 304(b) to discussing in detail whether entry taxes are discriminatory vis-a-vis the goods manufactured within a local area qua the goods imported from outside that local area and therefore whether it is an impediment to the freedom of trade, commerce and intercourse throughout the territory of India enshrined in Article 301.
Counsels on behalf of the State Government endeavored to justify levy of entry taxes by raising the presumption that public purpose is always inherent in levy of taxes and making a distinction between discrimination and deliberate/purposeful discrimination. They argued that purposeful discrimination between goods imported from other local areas and goods manufactured within that local area is necessary for the upliftment and development of the
state.
The judgment has now been reserved by the Hon’ble Supreme Court of India. 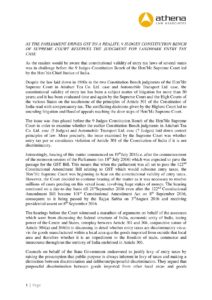